Do your Beans have poor Germination?

Have you ever noticed how poor the germination is on bean seed that you seed directly into the garden? I used to think it was the seed I was buying but now I’m convinced that if the weather is not perfect the seeds damp-off or bugs get them and they never do come up. Sometimes our germination has been as little as 30% with only a third of the row popping out of the ground. Part of our problem is not waiting until the weather is hot consistently and with no chance of rain, but we cannot do that as we have to plant when the calendar says plant. 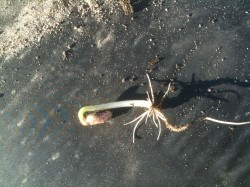 When it is time to start the plants we seed three double 50 foot rows at a time so that the harvest is the right amount for the markets where we are selling. That translates into 12 grocery bags full a picking and we pick twice a week. Beans produce fairly heavy for three weeks with a small crop on the fourth week. They are on the calendar to seed every three weeks until the first week of July. I start the beans on the seeding table by pouring our mixed potting soil through a straining tray that has a small grid on the bottom of it. Covering the bottom of the tray with soil, I measure out 1 cup of bean seed into a wide mouth quart jar, slightly dampen it and pour off excess water. Then into the jar I pour a little (about a teaspoon) of the Inoculant for legume seed and shake it around until all the seeds have a little of the black powder attached to them. The Inoculate increases your yields as it attaches the Nitrogen directly to the seed to make it readily available as it sprouts. I pour the seed into the tray and cover it with more potting soil and finish with a plastic wrap over the tray. When the beans push the plastic wrap off of the tray in about 3-4 days, then I pour the whole content, dirt and all into the separating tray and pick out the sprouted beans to plant them into the garden. 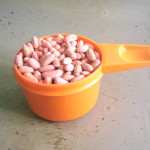 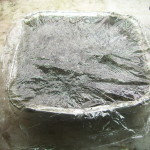 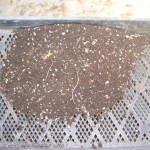 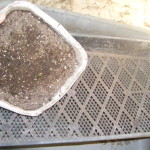 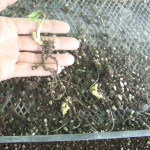 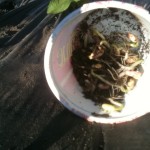 Heading down each side of the drip tape about 4-5 inches apart and the same distance from each side of the t-tape I slice the plastic with the trowel lean it forward and insert a bean sprout into the soil holding it by the bean head and planting it as you would any plant with the top slightly above the soil. 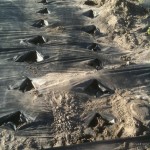 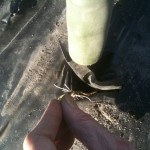 In just a few days you will see a beautiful 100% 🙂 sprouted row of beans with their heads peaking up above the ground and the plastic mulch. 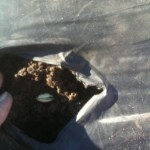 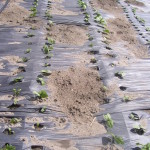 2 Responses to Do your Beans have poor Germination?