Spacing the T-tape into rows

After we fit the seeper ends onto the t-tape then we stretch the t-tape down each row.  The holes are poked into the mainline and the seeper end of the t-tape is pushed through.  Our blocks have 50 foot rows so that is how long each t-tape is cut.  On the end of each t-tape Ken does an inexpensive and very niffty fitting.  He cuts 2 to 3  inches off the tape, folds the tape over once and slips the folded part through the 2 inch sleeve of cut t-tape.  This is handy when we need to drain the t-tape from sand or trash that has come through the system.  We pump out of the river and sometimes a line will get clogged; then we just slip the end off and run water out until it is clear, fold it back up and slip the 2 inch sleeve of t-tape back on. 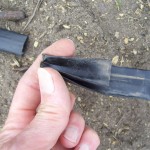 There are fittings that can be bought if you want to spend the money; but the cost does add up if you have very much t-tape in your garden.  Another way you can seal the end of each t-tape is to use the ever-present electricians tape.  Just fold the end of the t-tape up, twice this time, and roll the tape around the end a couple of times. 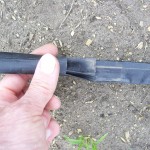 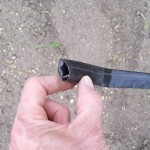 Now we are ready to lay the t-tape across the garden fitting the seeper end into the mainline and pulling the t-tape straight at the end of the rows, spacing it the same distance as the holes at the top in the mainline.  When the t-tape is put in by machine it is buried about 2 inches under the soil so that it doesn’t move around when the water is turned off and the t-tape is not in use.  We like the t-tape to be free to move so that it is easier to pull out of the garden for fall clean up.  If the t-tape is stationary, buried in the ground, the corn will capture the t-tape with it’s roots which makes it impossible to pull the tape through the heavy corn roots.  After the t-tape is spaced for the crop that will be planted in that area then you are ready to begin laying down the Plastic Mulch.