We have had such nice and mild fall/winter weather. Because of the warmer temperatures all the rain that has fallen is just that and not snow; A little colder and we would be struggling through 6 feet of snow. We need the moisture for the ground and rain is good but we do not miss the hard work that the ‘beauty’ of the snow creates :). According to idcide.com The annual average precipitation at Kettle Falls is 20.93 Inches. Rainfall is fairly evenly distributed throughout the year. The wettest month of the year is December with an average rainfall of 2.46 Inches. This year so far we have had 8.44 inches in December. Wow that is good! So out to the garden we go to try and get it cleaned up as much as we can before the snow hits and the ground freezes. Ken attached the mower to the tractor and decided to try something new: mowing the corn. 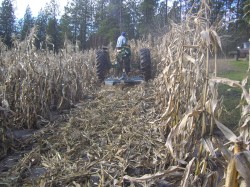 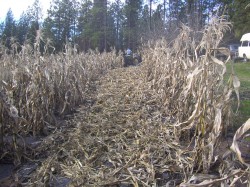 When he first started it was quite warm out and I noticed he was wearing a long sleeve shirt, before long though he was in the house saying it was cooling down and looking for his jacket. He mulched the whole garden and it looks so nice. Mowing down the block of broccoli it smelled just like when we were blanching and putting up the broccoli into freezer bags for winter storage. He wasn’t able to get all of the stalks though because part of the garden is planted among the fruit orchard of apples and cots. 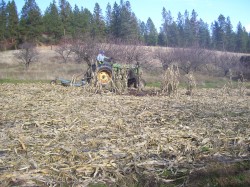 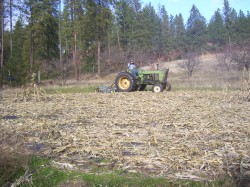 After finishing mowing he tried pulling the plastic mulch. It was so much easier after all the foliage, stalks and debris were eliminated. He came in excited to be able to finish cleaning up a block in record time.

On quite a funny note…we were sitting in the house and all of a sudden heard quite a clatter on the roof top, no it wasn’t Santa Claus actually it was our Hamburg Chickens. They have been out everyday working the garden for bugs. A very flighty breed they had spooked at nothing and had flown over the roof; some landed on the roof as they went over, and amazingly some in the top of three of our cherry trees. A partridge in a pear tree? I had a good laugh for the day. 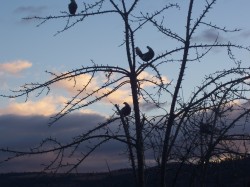 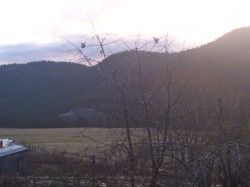 This entry was posted in Plant Care, Weblog.