One of the best slicing cucumbers that I’ve found is called, “Sweet Slice“. It is our favorite cucumber. This is a bitterless, burpless, small seeded, very crisp and always a straight cucumber, unlike other cucumbers that claimed their right to straightness and were not when we grew them. 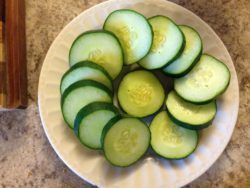 We just love this cucumber and many of our customers would rush to our stand and buy eight or so of them at every market to make sure they had enough for the week. As I write this post I hate to be rude and not share with you, but I just have to snack on them as they are so good. 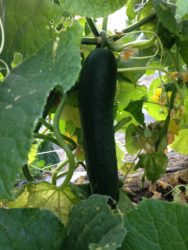 We are growing a short 10 foot row in the greenhouse this year along with a variety of other veggies: melons, beans, tomatoes etc. I was able to find two ripe cucumbers this evening that grew just today as I know that Ken pick three this morning to share with the potblessing at church today. Both cucumbers are straight and about a foot long just like the beautiful ones that are in the grocery store, but unlike the ones in the grocery store you can see these have nice tight little seeds that are crisp and not soggy. I can’t eat just one. You will notice that I leave the skins on. The first three weeks of picking the skins are tender and so I usually eat them skin and all as that is where most of the vitamins are on vegetables. By the end of the harvest the skins are getting a little tough and I peel them but they are still just as sweet and crunchy as they can be. 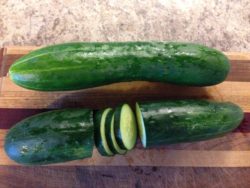 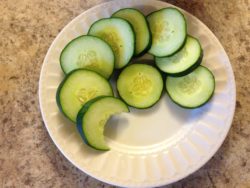 The vines have lots of little cucumbers coming and are covered with blossoms. There will be six weeks of good growing for harvest. We need to seed our next crop immediately as it takes about six weeks for the plants to grow and produce their first cucumbers for eating. 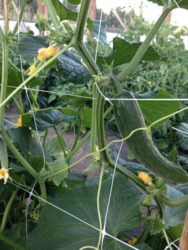 Opps, I can’t stop eating them they are so good! All I can say is grow them yourself and make the comparison, I don’t think you will be disappointed. 🙂

This entry was posted in Harvesting, Planting.