It is time to plant the pepper seeds. I know that your pepper seed package says 74 days and you are thinking, what does that mean?  74 days from February 15th is around the 1st of May and in this cold climate it just doesn’t compute.  What the days on the package are counting from is when you transplant or seed in the ground. Now if you live in southern California or some other zone 9 or 10 it is a good time to seed directly in the ground and you will get ‘fruit’ in the allotted amount of time.  Yep, those 50 degree nights really grow the vegetables. But in our northern states our plants will have to have a good head start and almost have buds on them when we set them in the ground. This will be after all danger of frost is past. We will begin to set out our peppers around May 12th. Last year I started them on February 1st and it was a little early as we had to pop off 2 inch peppers from the plant so as not to stunt the poor little things. We did have early peppers at market though, around the end of July. 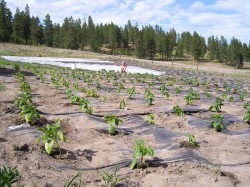 Transplanting Peppers on May 20th

This year my seeding calendar says the peppers are scheduled to be seeded on February 15th. That will be plenty of time to get them to the size they need to be for the day of garden transplant. Of course you will get peppers on the smaller plants; they will just be about a month later to ripen.

Using the cooked dirt I mix up the potting soil, keeping it a light fluffy mixture which would be two parts sand to 1 part each of Perlite and Peat Moss. Filling the double lined tray with the soil to the top and using a long curtain slat, I make 5 evenly spaced rows about 3/8 inches deep. 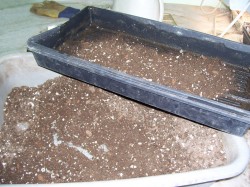 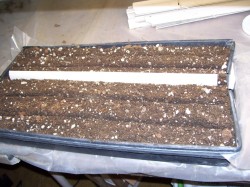 In each row I drop the pepper seeds spacing them about 1/2 inch apart. Be sure and label each row if they are different varieties.  I usually get 30 seeds in a row and if the seeds drop too close to each other I actually separate them with tweezers. The reason for this is so that the seedlings can have more room to develop strong stems before transplanting at the four leaf stage.  I cover the row by pushing the ditch over on top of the seeds and firm the row down with my fingers. 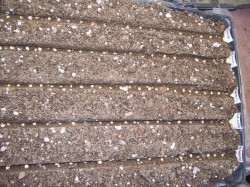 After the tray is seeded then I pour about 1/2 quart of water in the end between the two flats, where I have forced a piece of foam in to keep it separate for watering, and above the plastic liner.  Then I cover the whole flat with a long piece of clear plastic saran wrap and set it on the heat table. It will be up to two weeks before you see the seedlings coming up. 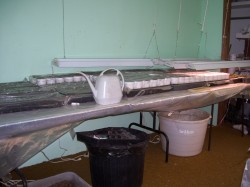