Now that the t-tape is spaced for the next crop and laid out in rows then we can proceed to cover the area with the Plastic-Mulch. Ken has designed a tool that the plastic roll fits on.  It has a large handle bar and fits into each end of the roll. The Plastic that we usually use is 6 feet wide and about 2000 feet long. A new roll is quite heavy but the guys throw it around like it weighs nothing.

The plastic on the end of the roll is completely covered with dirt to stabilize it. Ben rolls out about 10 to 12 feet and then starts shoveling on the dirt. He makes sure that he overlays the previous row by 4 to 6 inches.  This allows for shrinking in the sun and some slipping in rain storms.  If he lays it correctly and places the right amount of dirt on the mulch we do not see too much movement.  Like the old adage. “A Stitch in Time saves Nine”  in this case, “Lay it right and you won’t have to do it twice.” 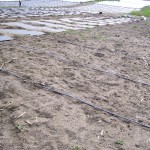 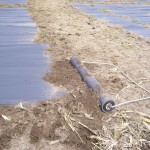 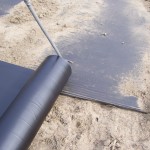 We always roll the mulch vertical with the slope of the garden, starting at the top and working our way to the bottom of the garden. This way when ever it rains each layer will pick up the rain water and most of  it will seep under the plastic instead of flowing down the garden in a torrent. This retains the moisture for your garden and keeps the plastic from floating away. After the end of the plastic is stabilized with dirt then we can roll out a long length.  Starting next to the roll he works his way back throwing dirt on every 6 feet. Working with the dirt beside the row he throws a shovel load on the opposite edge, the middle and the new edge. Before we lay the next row we come back through and smooth out the area that we took the dirt from, otherwise it would leave a hole under the plastic that you could turn an ankle on if you happen to step into it. 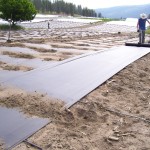 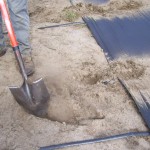 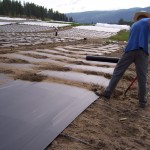 If we have extra help then we have one person rolling out the Plastic-Mulch while the other one shovels on the dirt. Of course it goes much faster this way. At the end of the row, again we completely cover the end of the plastic with lots of dirt to hold it in place and seal the end.  He then cuts it loose by chopping down through the plastic with the shovel along the large roll of Mulch.  Now they are ready to begin the next row.  While he sets it up she fills in the holes and smooths it out for the next layer. 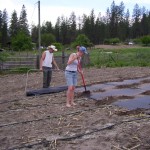 One Response to Laying Down the Plastic-Mulch