The Bees are Swarming!

Never a dull moment on the ranch!  I head out to talk to Ben about taking another photo of the seeper tips for my article and I hear the familiar buzz of the bees swarming.  Ben was laying the plastic mulch down the hill from the hive.  Oh no, not what we wanted to do today but bees never swarm at a convenient time.  The thought does cross our minds, “lets just let them go”.  They were still in the air flying around and it was a large amount of bees.  Of course they landed and gathered out of reach in the pine tree above their hive and as they clustered we realized how large; probably around 4 to 5 pounds of bees. 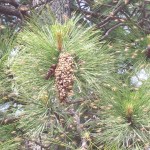 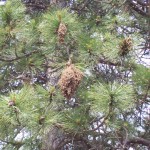 We stood around and watched for awhile and wondered why they gathered on several branches.  It wasn’t long until the main swarm was hanging down about 18 inches.  Oh my, we just could not leave it alone.  So we ran for out trusty bucket, long stick and yes, electricians tape which is always in Ben’s pocket.  He attached the stick to the bucket with a few swipes of tape around the bucket and grabbed the orchard ladder.  Meanwhile I dug through the hives that didn’t make it last winter, emptied a box of frames except for two on each side; then I tried to strategically place the box directly under the swarm.  While I’m looking up at the swarm Ben tells me, “Watch out mom that they don’t drop on your head.” They were getting heavy and really weighting down the limb.  He climbs the rickety old ladder and says, “hold the ladder mom”, I’m thinking, “yeah as he drops the bucket of bees on my head, he’ll probably break his leg and I’ll get stung a hundred times.” 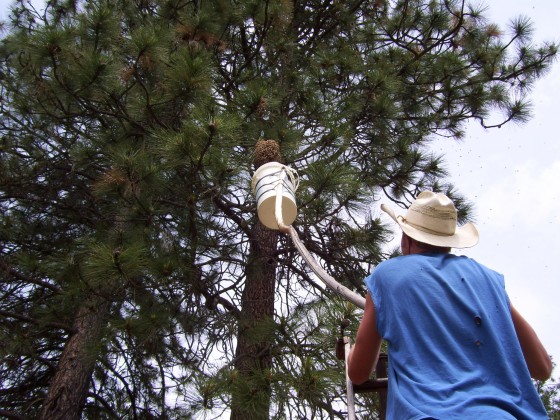 He raised the bucket under the swarm and gave a couple of quick jerks upward; they dropped into the bucket and he brought them slowly down.  He bounced them on the ground in front of the hive and quickly ‘dropped’ the hive lid on top of the box.  THEY DID NOT LIKE THAT!  And evidently we did not get the queen because they just flew back up to the tree limb.  He didn’t get very many the first time and so now we were determined to get them.  Up he went again with me ‘holding the ladder’.  As you can see I was only holding with one hand because I was taking pictures with the other. He gave them a good bounce which dropped them right on his face, getting a little excited with them buzzing his eye he blinked hard and was stung under his eye; but this time he must of had 3 pounds.  It was real heavy. He just poured them out in front of the box and they mostly hung around the front and some inside. 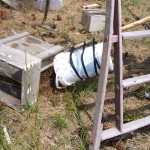 We made some mud with the dirt (and spit) to rub under his eye so it would not swell and watched the bees for awhile but they began to gather on the limb again.  So up we went for a third try.  He bounced them in the bucket and brought them down and dumped them in front.  We had the queen this time; she went in the hive and as we watched, like magic they all began to run into the hive.  A lovely site to see.  Some of the bees were still gathered in a small cluster up on a pine limb.  We left them alone for a while and went to lunch.  We tried to get the small cluster down but gave up.  I wonder if there was another queen in that bunch because they would just cluster on another branch after we had disturbed them several times and would not stay down or go into our new box with our queen.  Later in the day they disappeared.

I opened our new hive back up and filled the box with frames.  Then Ben and I carried the hive ‘carefully’ over to the cement block that would be their permanent home.  They must of been happy with their new home because they were still in the box when we went to bed.  Well we just doubled our bee apirary from one hive to two; not bad for an hour of playing with the bees. 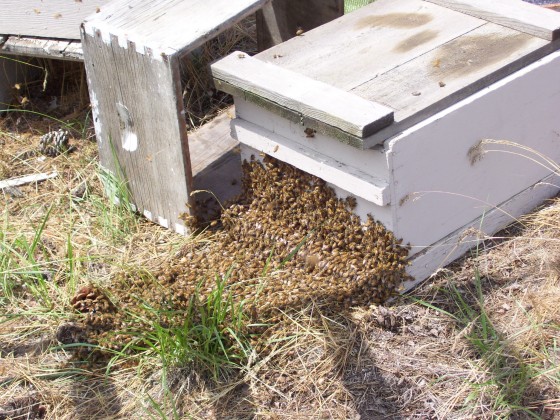 This entry was posted in Weblog.